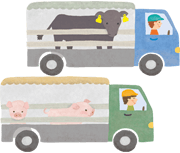 Cattle and hogs are raised for a certain period of time by each producer.  After they have reached a specific weight as above, they are shipped by dedicated truck to the market. 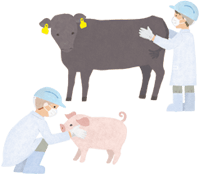 In live animal inspection, cattle / hogs are checked for any abnormalities in their appearance and manner of walking. If necessary, inspector takes a blood sample from cattle / hogs to check for any abnormalities before slaughtering.
* For more information about those live animal inspections, please contact the Shibaura Meat Sanitary Inspection Station, Tokyo Metropolitan Government.

Cattle / hogs that have passed live animal inspections are cut into dressed carcasses by skilled our employees.

⑤ Inspections carried out after slaughtering

Inspections are carried out to make sure that there are no abnormalities with the top parts of the head, offal, and carcasses. 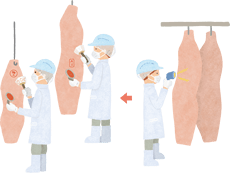 The dedicated grading staff of that Japan Meat Grading Association will evaluate carcasses to provide a grading used as a benchmark in their distribution. 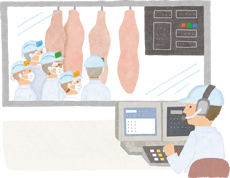 Graded beef / pork carcasses are sold by auctions.
The auctions are carried out by our employees with auctioneer licenses to help achieve a fair and impartial distribution of meat.

Bones are removed from carcasses that have been purchased through auctions, and then separated into different cuts, such as sirloin and ribs, to make them available for sale at meat shops and supermarkets.

Meat parts that have been purchased through wholesalers are sliced, cut into blocks, or finely chopped into ground meat, and then sold at meat shops and supermarkets.

⑩ They are served at your table. 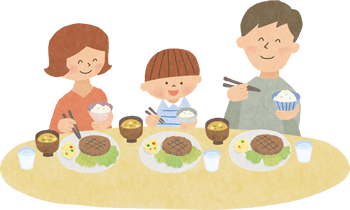 Purchased meat is cooked for tasty dishes at home.